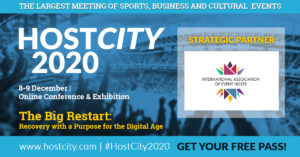 IAEH is pleased to be working with Host City as a Strategic Partner.
IAEH members are encouraged to take advantage of a greatly reduced rate to Exhibit at Host City.
Email admin@eventhosts.org to find out more about the benefits of joining Host City as an IAEH member.

Host City, renowned for the highest level of speakers and content, is excelling itself at this year’s event with an unprecedented level and diversity of representation from the world’s greatest event owners, organisers and hosts.

In addition to great content, the digital platform enables all the other hallmarks of Host City – world class networking, and an exhibition of events, hosts and expert suppliers.

Brian Lewis, President, Trinidad and Tobago Olympic Committee and Densign White, Chair, Sporting Equals tackle another dominating issue of 2020: the impact of the Black Lives Matter movement, while Sabrina Ibanez, President of the Association of Paralympic Sports Associations leads the panel on inclusion and diversity.

Host City is the largest meeting of cities and sports, business and cultural events. To exhibit contact adam.soroka@cavendishgroup.co.uk. For speaking opportunities contact ben.avison@hostcity.com